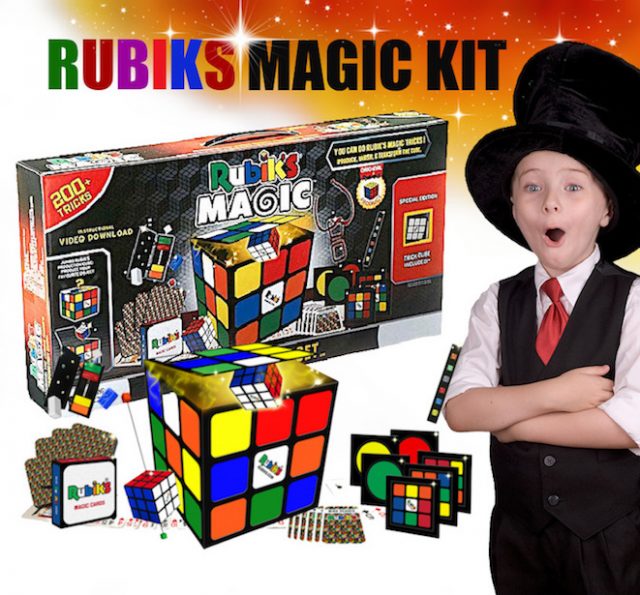 Rubik’s Mind Twisting Magic set With 200 plus Tricks you can perform. 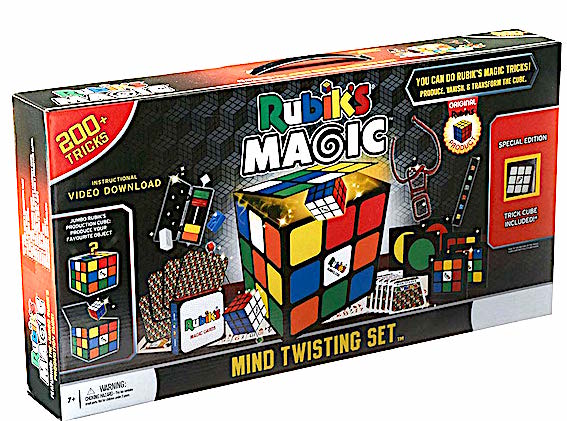 Includes over 200 tricks to wow and impress your friends 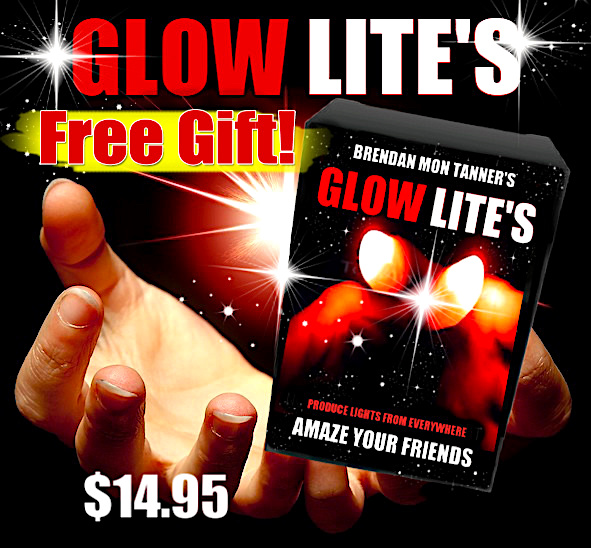 You will receive the awesome Glow lite’s which are valued at$14.95 in Magic Store FREE when you purchase this kit.This is a fantastic trick that would amaze your friends  or an audience. Imagine plucking these glowing lite’s from every where, It is mind-blowing and looks like real magic.Amaze your friends or your audience with this amazing illusion. Yours Free with this Magic Kit.

Rubik’s magic is the hot new trend right now! From instant solves to mind-reading, our sets and individual tricks will keep them baffled using the best-selling 3-D puzzle of all-time! Since the Rubik’s Cube is an item commonly found in many homes, no one suspects it as a magical prop! Here’s what you can do with our magical Rubik’s Cubes!

The Jumbo Rubik’s Production Box: a large, square box- designed to resemble a classic 3X3 Rubik’s Cube- is shown empty to the audience. A Rubik’s

Cube is then placed into the empty box and the box is again shown empty- the cube is gone! The box can also be used to produce many solid items out of thin air!

Rubik’s Prophecy: Six different plastic plates are shown to each have an illustration of a scrambled Rubik’s Cube on the front and one of the colors of the Rubik’s Cube on the back. A spectator randomly chooses one of the plates. A small envelope is then brought out which contains a prediction. When the magician opens the envelope, the prediction contained within matches the color on the plate!

Rubik’s Magic Cards: these sneaky cards are cleverly marked for a variety of magic effects! Guess the chosen card, find a chosen card behind your back and much more!

Rubik’s Cubio: a trick cube is shown to have a long string threaded through the center of it. The cube slides freely up and down the string. The string is held with the cube at the top and the cube is dropped. The magician yells, “stop!” and the cube suddenly stops in the center of the string, defying gravity! The audience can also command the cube to stop and start!

Rubik’s Block Escape: two colors are chosen. Six small blocks are placed in a box and secured with a rod. In a snap, the two blocks that match the chosen colors penetrate off of the rod and fall free from the box! The remaining blocks continue to be secured by the rod!

Rubik’s Hot Rod: a long, flat rod is shown to have all of the colors of the Rubik’s Cube on both sides. A color is chosen. In a flash, all six colors change to the chosen color!

Rubik’s Square Knot: a piece of rope is shown and the ends are tied together. As the knot begins to form, a square visibly appears in the middle of the rope! Suddenly the square instantly pops off of the rope!

Rubik’s Mind Reading Cards: a spectator chooses a number at random and is shown a series of six cards, each with a different set of numbers on it. The spectator is instructed to simply say, “yes” or “no” if they see their number on one of the cards. At the end, the magician correctly names the chosen number!